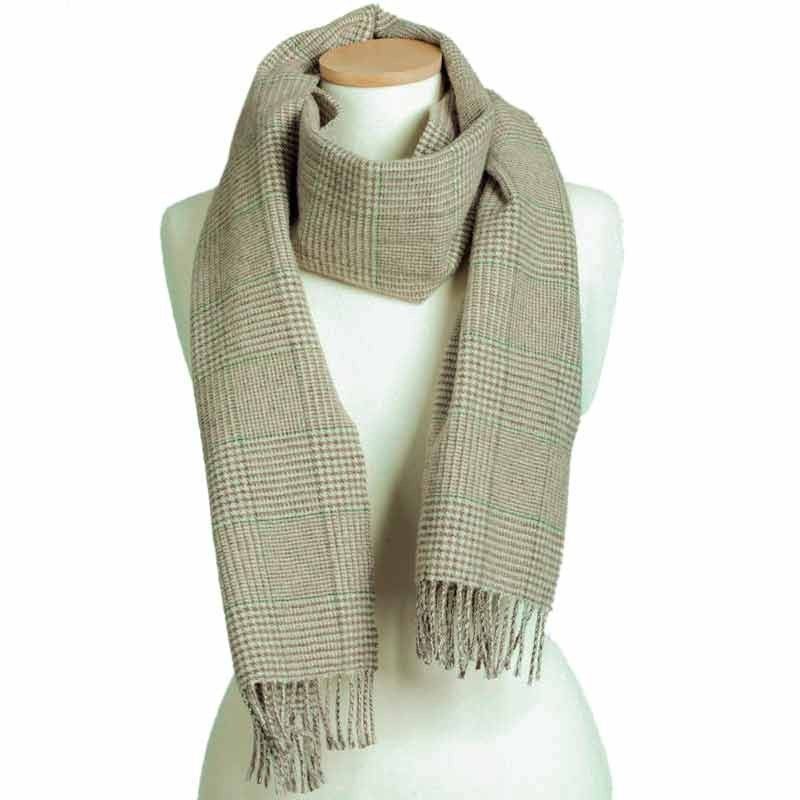 Scarf Prince of Wales Green for woman made in the traditional factory from Grazalema.

The origin of the scarves is controversial, but it seems that is very old, contrary to what you might initially think, when we see the scarf as a current female and male plug. The scarf, appears in ancient writings of classical Greece, as a scarf around her neck stood and which were protected from the cold.However the Chinese Emperor Cheng, and used scarves or like the time to identify and distinguish the soldiers of his army. While some authors attribute the literal invention scarf as we know it, ie, as a fashion accessory with a longer size than wide, the fourteenth or fifteenth century.

The factory has a museum consisting of textile machinery nineteenth century. This museum can be visited during working hours Monday through Friday.

The wool is now considered an ecological fiber, naturally occurring, renewable annually, sustainable and biodegradable. The physical properties of the wool fiber insulation and elastic give kindness, while their chemical bonds make it breathable and hygroscopic (moisture absorbing means), without forgetting the anthropological connotations of this fiber, being one of raw materials historically most valued by humans.

It is recommended to wash the wool blankets Grazalema by hand with cold water using mild detergent in a tub or the like, drain the poncho in the bathtub detach itself until the water completely and naturally. Lay it at night to avoid the sun. In any case, use hot water, no washing machines or dryers, in which case the garments inevitably shrink. Do not rub or strike during washing.

Village located in the heart of the Sierra de Cádiz, is famous for its abundant rainfall, its forest of Pinsapos, and the quality of their wool blankets and ponchos dating back centuries.

Based on 1 customer reviews

Did you find this helpful? Yes 0 No 0